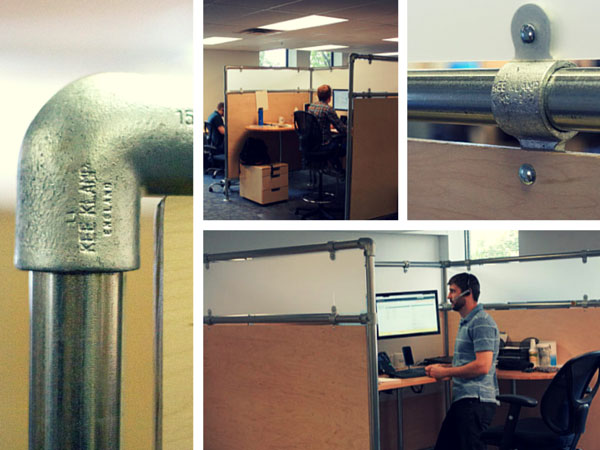 In our last post we talked about the process of moving into our new office, covering the eventual path we took to landing in the new space and the reasoning behind choosing to use Kee Klamp throughout the office. If you haven't had a chance to read through it, check it out here: "Creating the Perfect Office Layout".

However, we faced a challenge in accomplishing this task. Mostly everyone in the office uses standing desks, with the exception of a few lazies, because they enjoy the flexibility of being able to sit or stand while working. You can do both with a pedestal chair. 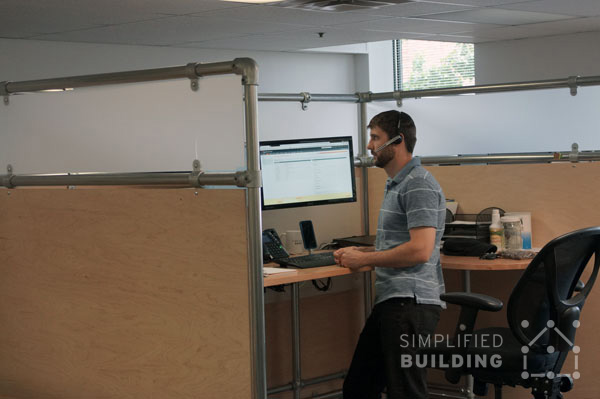 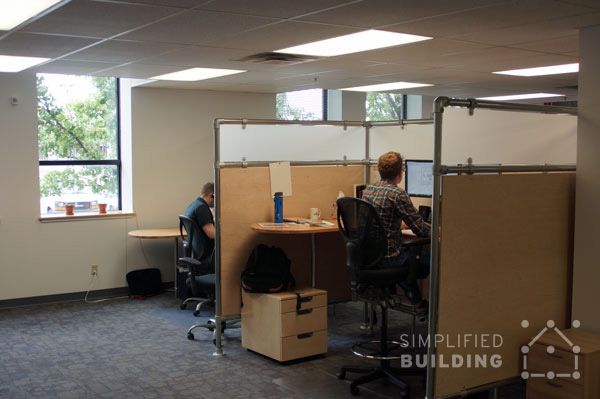 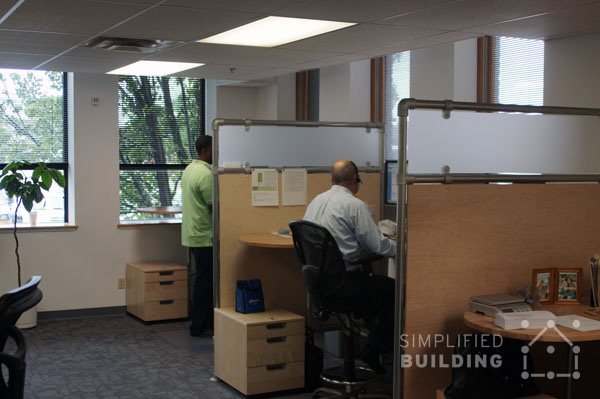 Yet, the problem is that in order to give some degree of privacy the cubicles would have to be really tall. Really tall cubicles, or cubes as we like to call them, could leave the office feeling rather stuffy and block light from the window. But after some thought, we discovered a solution that would fit the bill.

We decided to use frosted plexi-glass as a means of allowing privacy but also allowing light to radiate though the office. The plexi-glass allows light to shine through yet still gives that feeling of privacy. 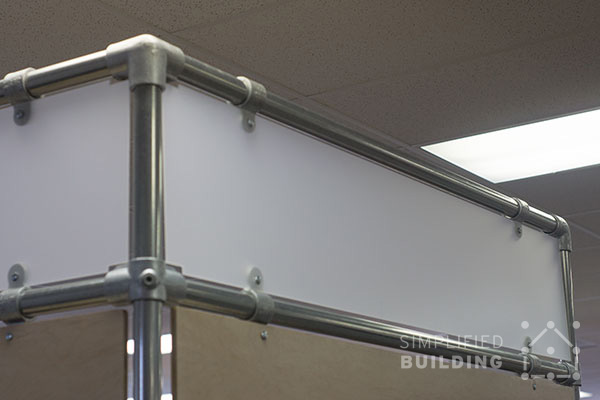 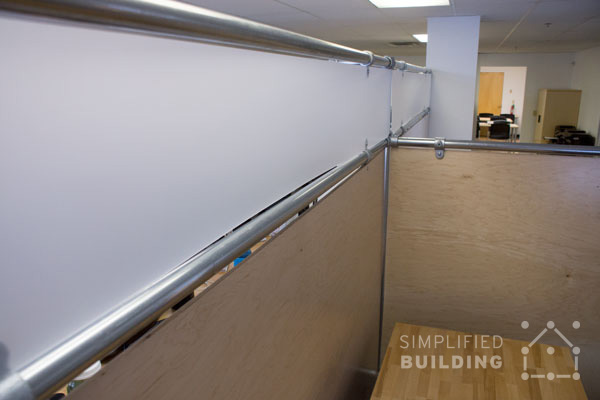 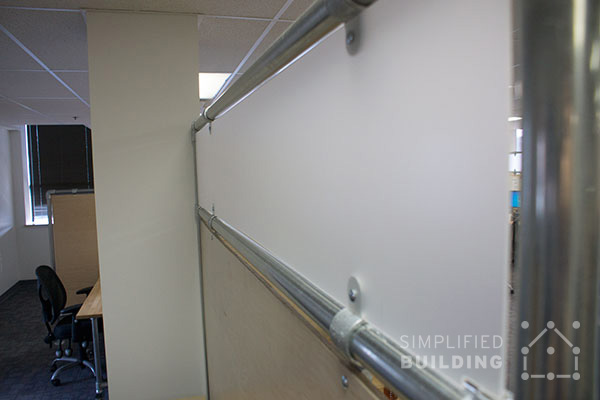 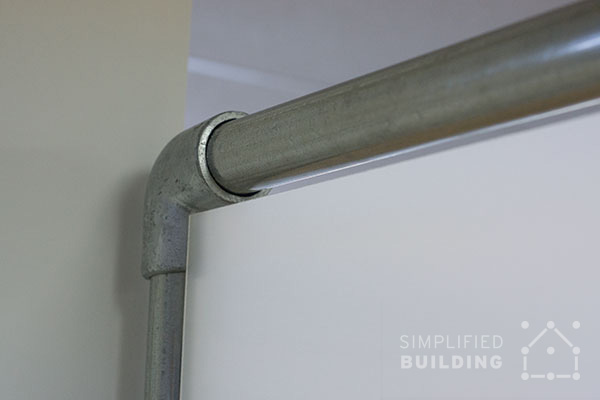 The top panels were cut frosted plexi-glass from Laird Plastics. The plastic panels were delivered in basic, rectangular shapes that we then modified by cutting out notches to fit them into place. We then drilled through the panels to attach the them to the cubicle frame. 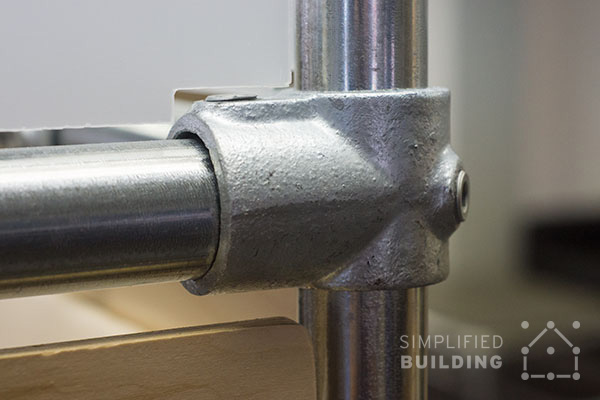 The cubicles were designed to be interconnected and leverage a common structure. Of which, each cubicle would consist of a wood paneling for the lower two-thirds and the frosted plexi-glass would comprise the upper, remaining section. This allowed for added privacy while letting light to shine through the plexi-glass panels.

The wood panels were constructed from maple plywood that we bought from Lowes. We then proceed to give each panel two coats of Aqua Zar Premium Water Based Polyurethane.

Once the cubicles we're built another concern that came about was sound. How would sound resonate throughout the space and how could we best tame it?

For starters, we have a low, drop ceiling and the office is completely carpeted which gave us a notch up in the sound department. But we still needed a bit more sound absorption for the cubicles. Sound tends to bounce off hard, reflective surfaces so we needed something for the cubicle paneling.

Chris' brother is an architect in the Boston Area and he recommended we coat panels of Homasote 440 with fabric. This would provide the dual benefit of sound dampening and pin-up space. 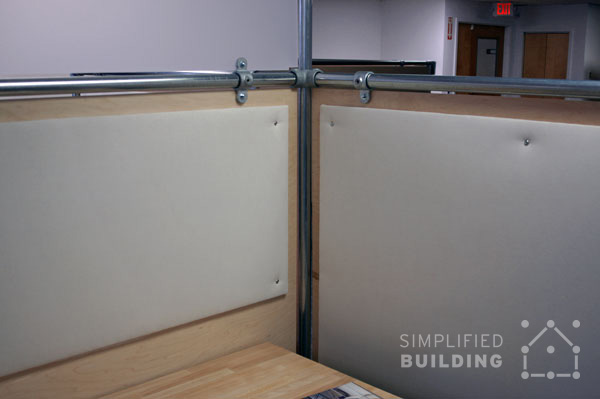 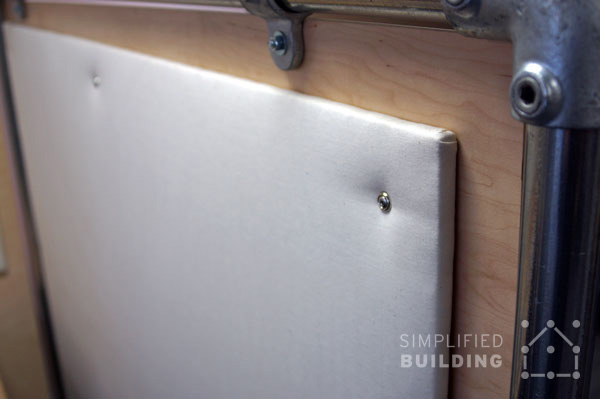 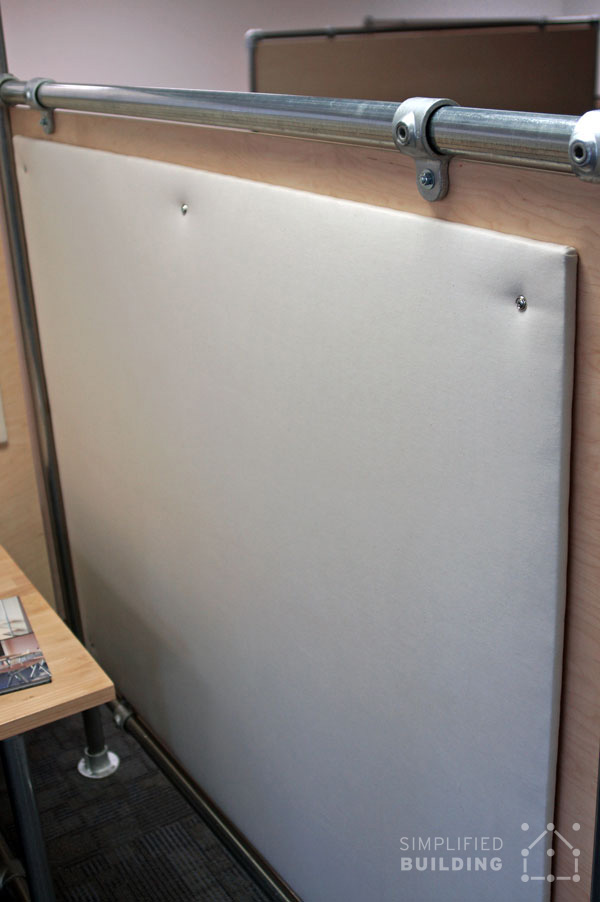 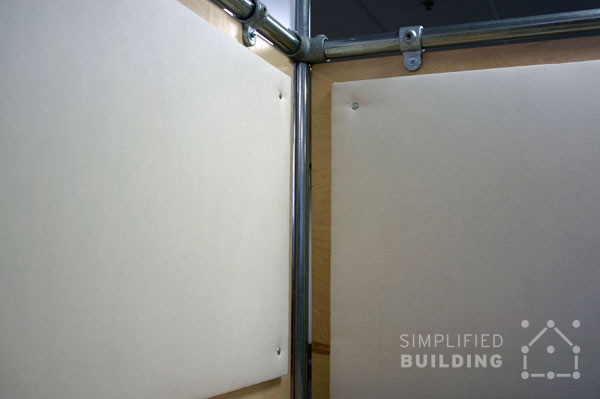 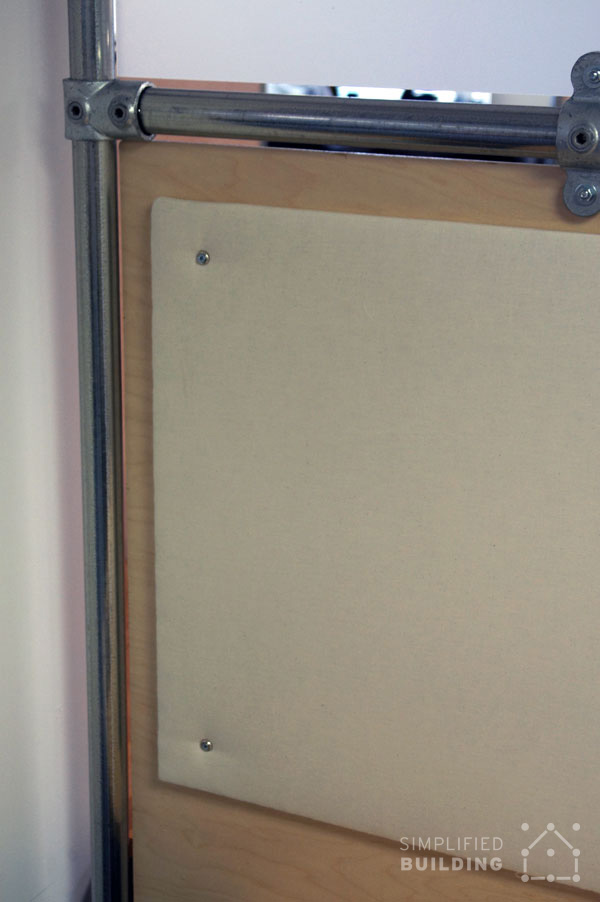 The panels were relatively easy to build. We cut the Homasote panels, then glued down some batting and wrapped the front of the panel with a natural colored muslin.

So now we had the privacy concern settled, however, in designing our new cubicles we also didn't want to isolate people so much as to cut them off from the rest of their team. So we put careful thought into the design and layout of the cubicles to allow for collaboration with special consideration for the depth of the cubicles. The cubicles were built in a C-shape just deep enough so that when someone was pushed in close to their desk, they would be somewhat cut off and be able to focus on their work. However, slide just a few feet back and they could talk with the person next to them or turn around to talk with the people across from them.

In addition to the cubicle design, we also used large L-shaped desks to accompany the frames. The desks allow extra space for a manager or team member to set their laptop down and sit with another co-worker at their desk. This makes it easy to work on projects together and for managers to work on training with team members. 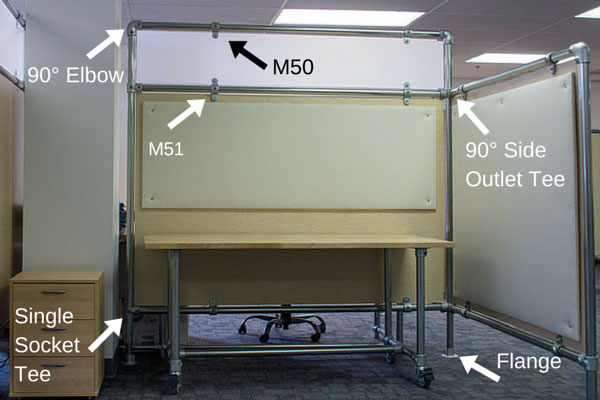 Like I mentioned before, each section of the cubicle frame is split into a few different parts: the plexi-glass panel up top to provide for added privacy while allowing light to shine through, the wood paneling which makes up the majority of the frame, and a space at the bottom of the frames to allow for cables to run through.

All of the cubicles followed a similar design. The Single Socket Tee helped to create the different sections by allowing the vertical supports to slide through and create a horizontal support, effectively breaking the frame up into sections. 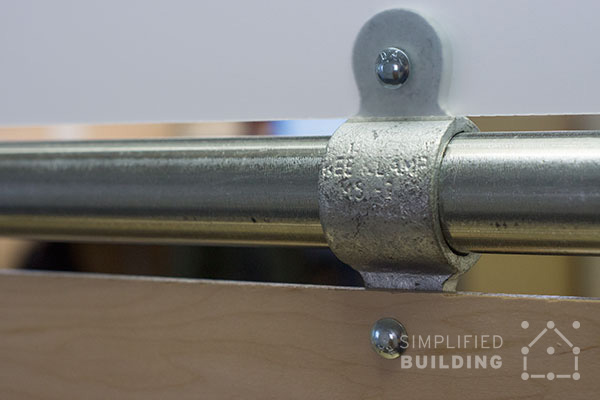 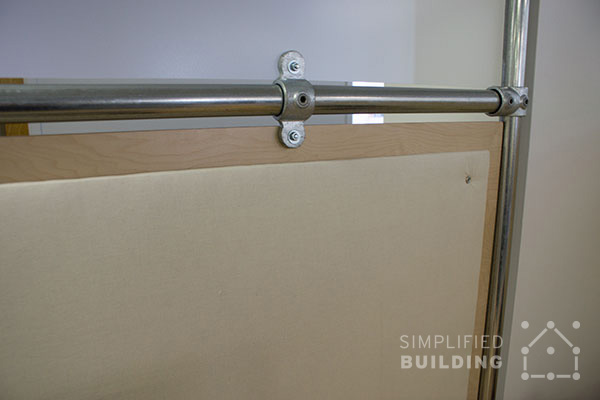 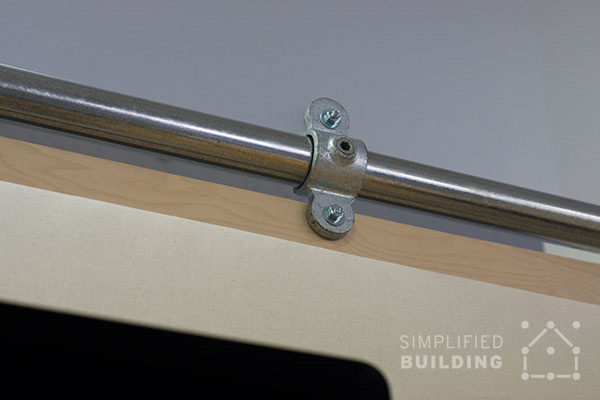 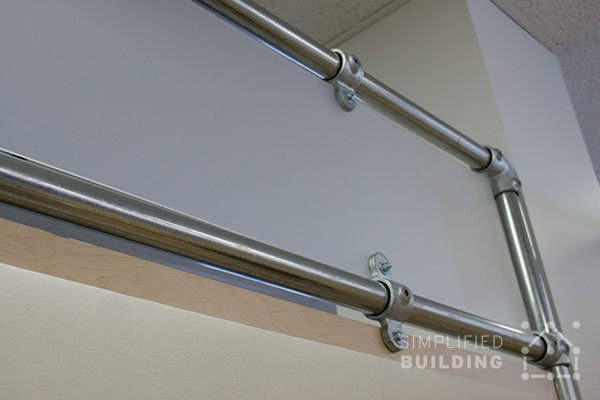 To create the corners the 90 Elbow was used in areas where the corner terminated and changed direction in a 90 degree turn. In areas where a corner needed to be created yet allow for pipe to slide through it in the vertical direction, the 90 Side Outlet Tee was used. 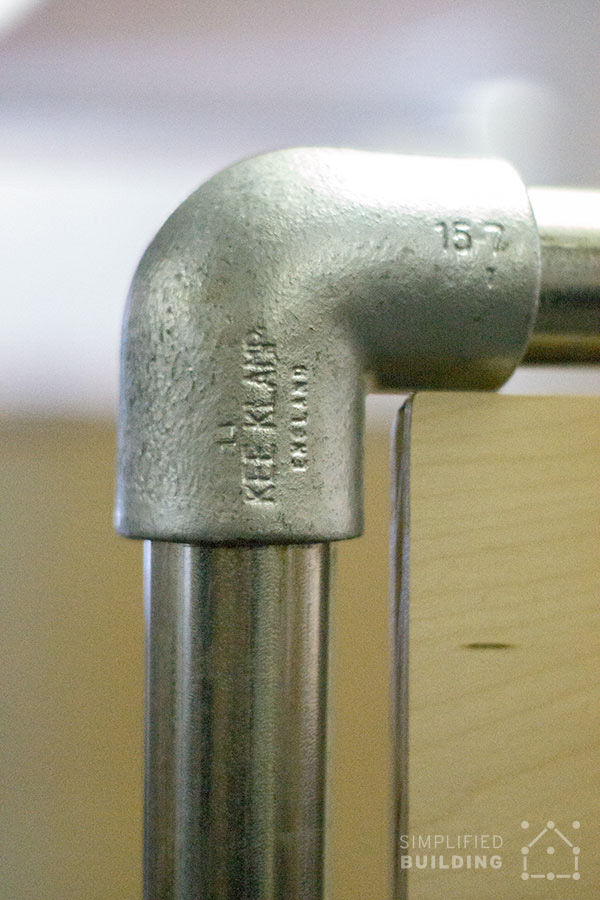 Finally, to create the base, the Flange fitting was used to provide a solid foundation.

The process of creating of the cubicles for our office did not happen over night. We spent a good amount of time working every detail until they were just right and met our needs perfectly. This is what we do. We work with customers until we discover a solution that will fit their needs perfectly. So when it finally came our turn, we knew what to do. Having a team that is adept in developing simple to very complex projects was extremely helpful. A resource that we offer to to you for free!

Next week we'll be covering how we created the sitting/standing desks that most everyone in our office uses. From the design, the functionality, and process of building the desks, so be sure to check back! 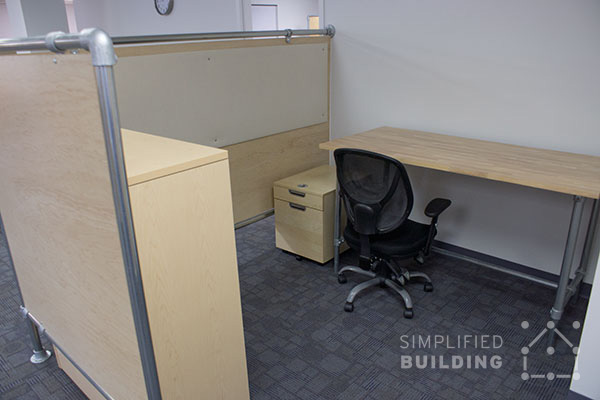 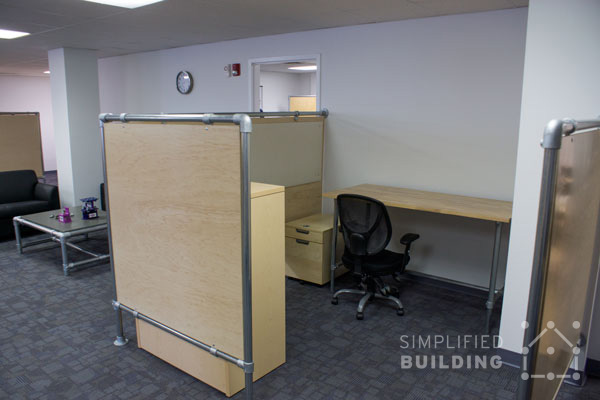 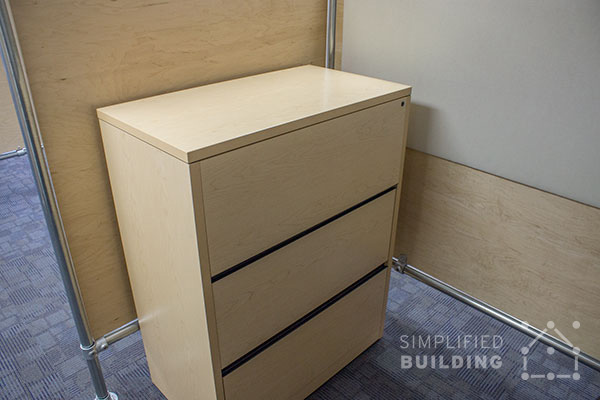 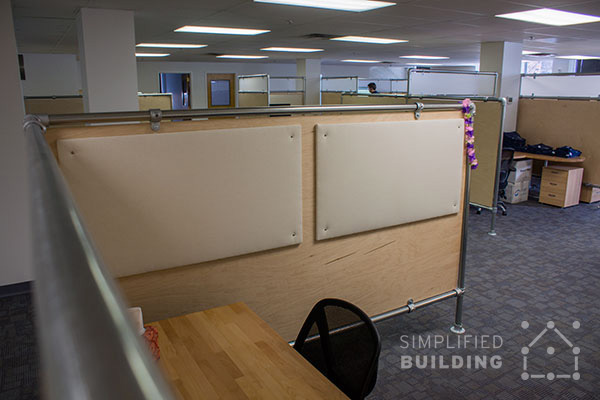 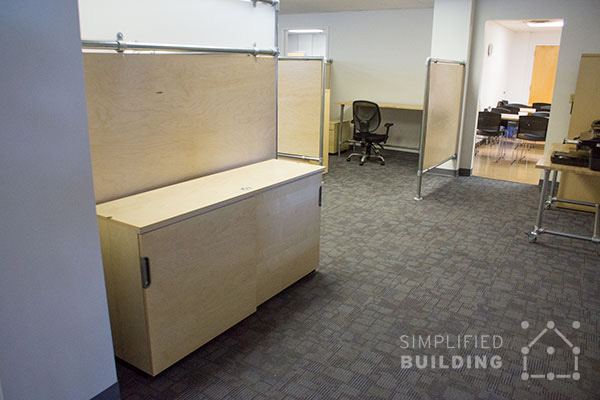 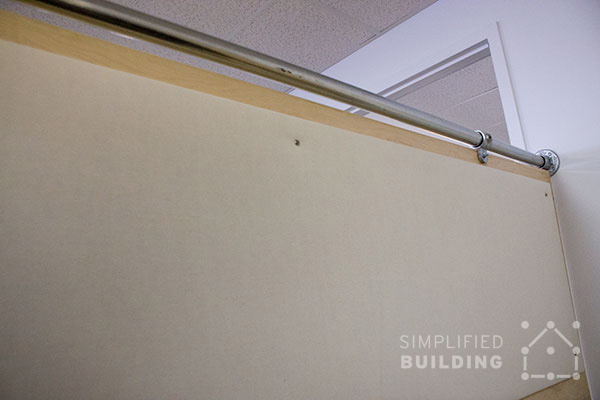 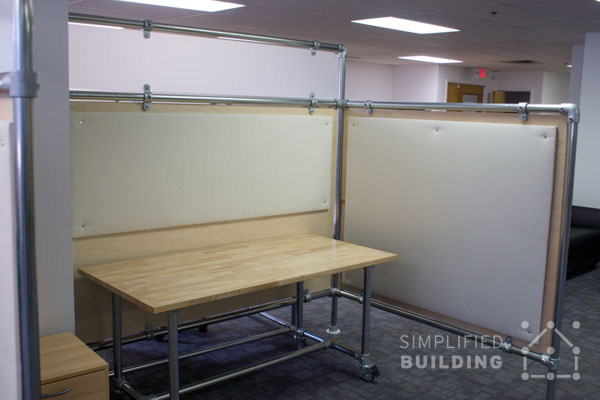 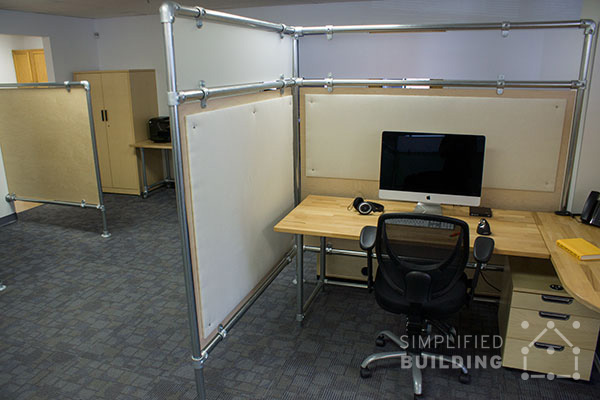 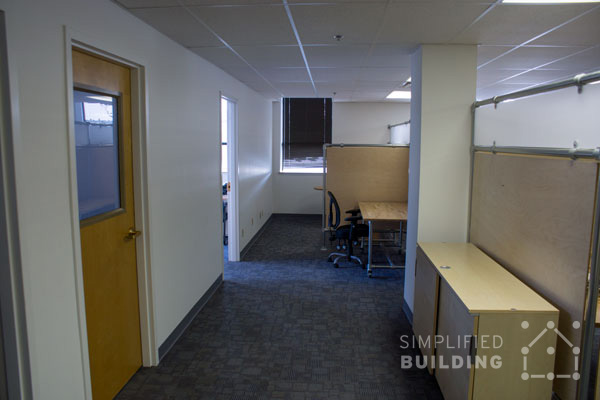