Survival of the Fittings

On Friday August 26, 2005, Daniel Becker of Spartina Farms was headed from his Baton Rouge, Louisiana home towards the coastal bayous. In the meantime, the city of New Orleans was beginning to evacuate upon hearing of the arrival of Hurricane Katrina. Why would Daniel be heading in the wrong direction? Dan is chief proprietor of Spartina Farms, LLC. Although his home is in Baton Rouge, LA, his business interests in the forms of hydroponic growing barges could in practice be located almost anywhere along the Louisiana bayous.

cycles in order to grow Spartina alterniflora and Spartina patens grasses used to restore coastal wetlands. With the invention of the Agrinaut, Spartina Farms is able to provide vessels for growing that perform unique functions. Using solar panels, pneumatic design, and computer controls, commands are sent to the barge that raise and lower it, creating a hydroponic cycle of ebb and flow, much like the ebb and flow of a natural estuary.


You are probably asking, what do wetland grasses and vegetation barges have to do with news about Kee Klamp fittings? Back to our friend Dan, who with his degrees from LSU in Oceanography and Coastal Studies, and also Environmental Management Systems, is a product innovator. The Kee Klamp Type 21 fitting is used in the frame design of the Agrinaut and is an integral component with regards to function.

On August 29, 2005, Hurricane Katrina slammed into the Louisiana coastline as a Category 4. 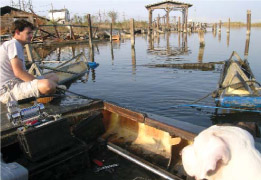 The Spartina Farms crew was not able to return to their work lab at Irish Bayou near New Orleans until November 10th. Upon their arrival, they found that their lab was gone, but the Kee Klamp fittings survived. By using an old time technique of scuttling (sinking) the barges before the storm, the Agrinaut vessel remained intact.

Dan along with his supporting team at Spartina Farms used agricultural concepts from the Aztecs of 1200 A.D while developing the Agrinaut. By marrying modern electronics with simple structural components Spartina Farms has built an easy to assemble unit that will assist in and benefit numerous coastline restoration projects. We asked Spartina Farms how the fittings held up in salt water. Their reply was "Very well. We are operating at a salinity of about 15 ppt or about half strength seawater, this is brackish. There is no corrosion after 1 year and counting."

To learn more about Spartina Farms, visit their website at www.spartinafarms.com. Spartina Farms will take part in the The 3rd National Conference on Coastal and Estuarine Habitat Restoration December 9-13, 2006 at the Hilton Riverside Hotel in New Orleans. [Download this Press Release]


This project is awesome!