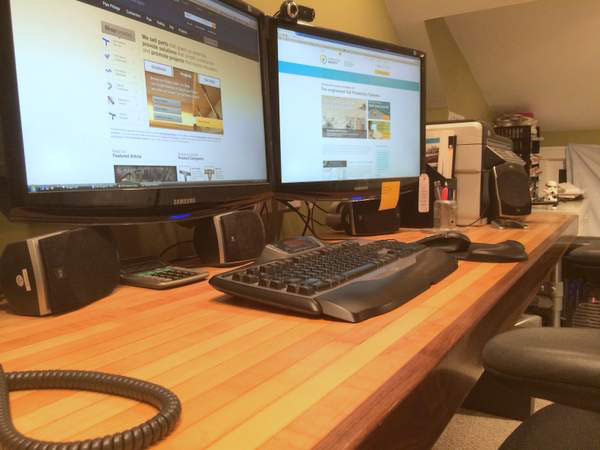 I have been part of the Simplified Building team for the past seven years, so I readily turned towards KeeKlamps for the construction of a new desk. I wanted the base of the desk to be simple so I could focus my attention on designing the tabletop. When you are able to put time and creative effort into a DIY project like this, you end up with furniture that tells a story unlike any other piece.

As a woodworker, I like working with reclaimed lumber. To find the right piece, I turned to Austin Brenneman at ecojacks.com to find the right piece. The Indiana based company specializes in reclaimed lumber, including old bowling alleys! I never worked with wood from old bowling lanes before, but it sounded like a unique challenge that could produce the desired result.

After discussing my project with Austin, I decided to have them send me two 8-foot pieces to be used in the building of my desk, along with some other pieces I want to build in the future.

Most bowling lanes are no longer made from wood, but on an older lane, the beginning of the lane is made from hard Maple (where the ball will land), while the middle and end section is made from pine.

I have always liked the look and hardness of Maple, so I chose that section making sure some of the tell-tale lane dots were in the piece. I wanted to transform the piece, but still have it be recognizable. 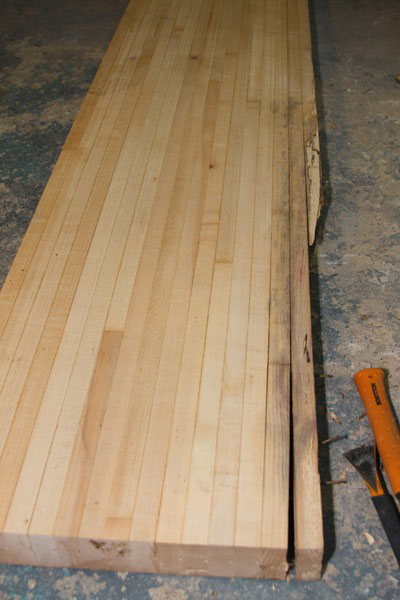 The lane pieces arrived by freight carrier on a pallet. With each piece weighing in around 300 lbs, I decided to break them up into workable sizes before trying to get them into my basement. The wood was able to be divided lengthwise by simply prying apart the sections they are held together with nails. 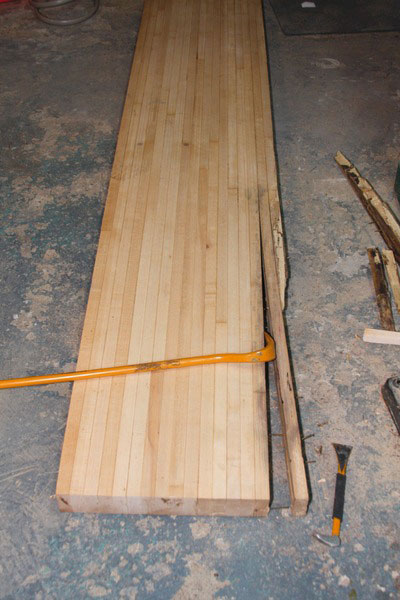 To cut the wood into smaller lengths, I used a circular saw. Of course this required the use of some “helpers” 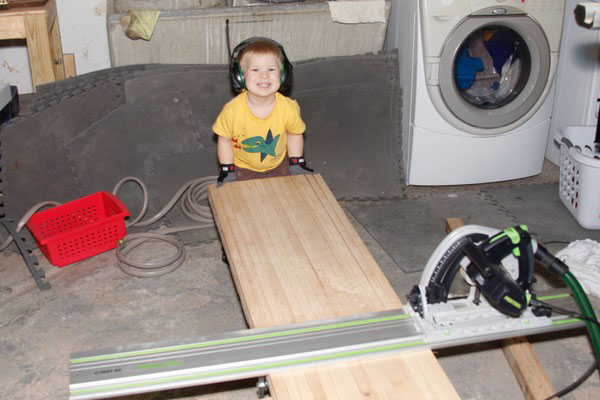 Be advised if you try this yourself, use blades you don’t mind tearing up. There are TONS of large nails holding the wood slats together that you will run into. I recommend making several passes with the saw, each about 5-10mm deeper than the last. The saw I used was the Festool TS 75 Plunge Cut Track Saw. This made for precise cuts, but any circular saw will do as long as you utilize a guide clamped to your work piece. 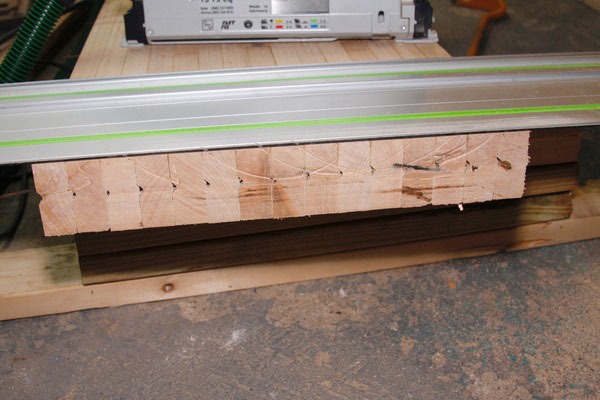 Once the pieces were the correct size, I wanted to add stability to the wood. As I mentioned, the individual slats were held together by nails, but that allowed some flexibility to the pieces I wanted to minimize. My solution attach some iron bar stock to the underside of each piece. 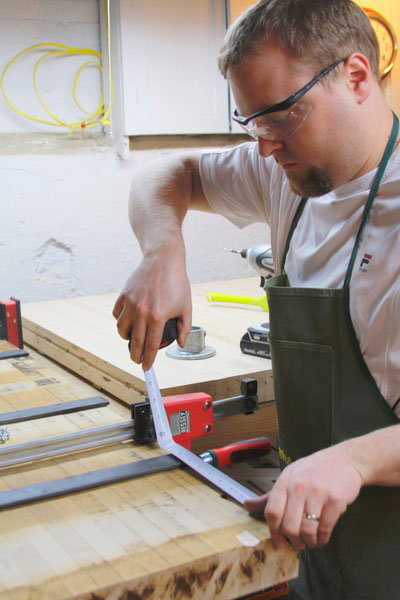 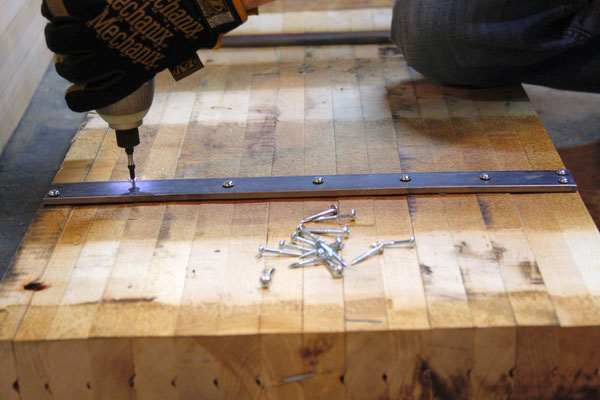 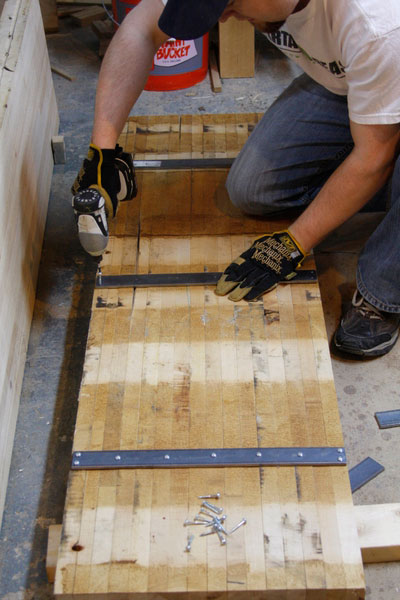 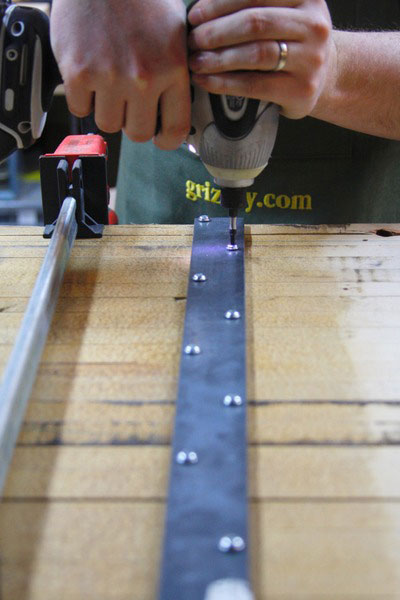 Next came the long hard work of sanding, sanding, and re-sanding. EcoJacks did me the favor of rough sanding the old finish off of the wood, but the surface was very rough, with quite a bit of unevenness to be dealt with. To even everything out and take care of the first few levels of sanding, I resorted to using my PorterCable 3” x 21” belt sander. To make sure I didn’t miss any sections on such a large work piece, I used a little trick I learned write all over the piece with pencil. 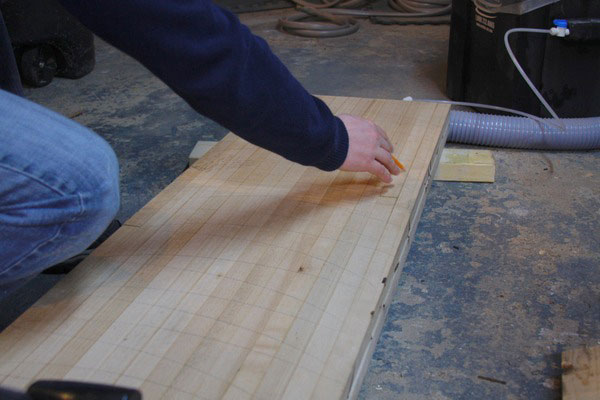 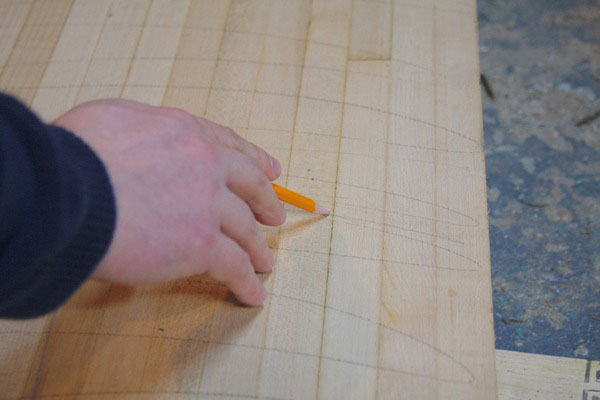 Then “erase” all of the pencil marks with the sander: 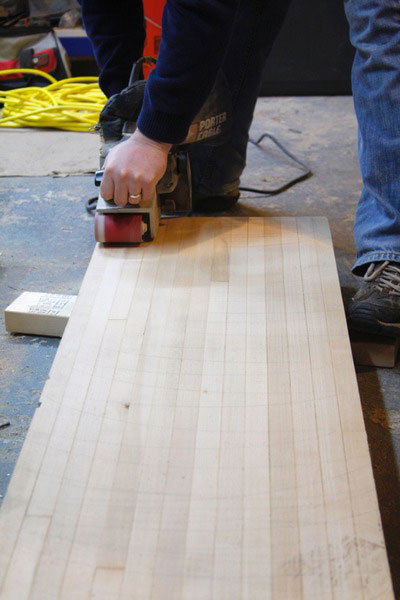 To effectively sand such a hard wood, I had to pay close attention to incrementally step up the grit level, starting with 36 grit, then 50, then 80.

Once I was satisfied with the rough sanding, I trimmed the desktop with 3” walnut to match the color of the dots in the bowling lane. 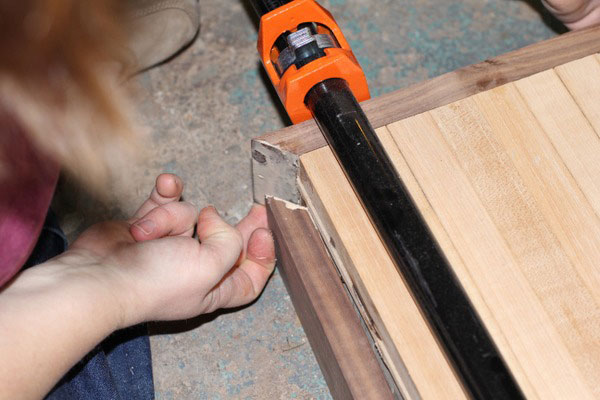 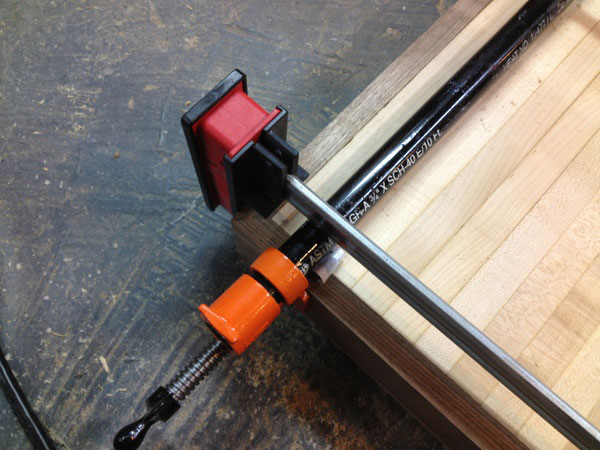 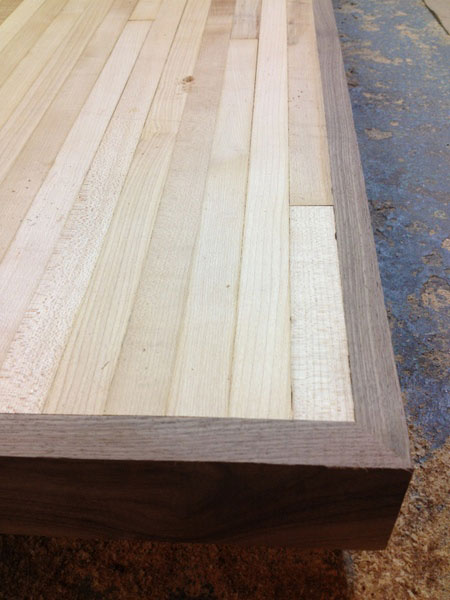 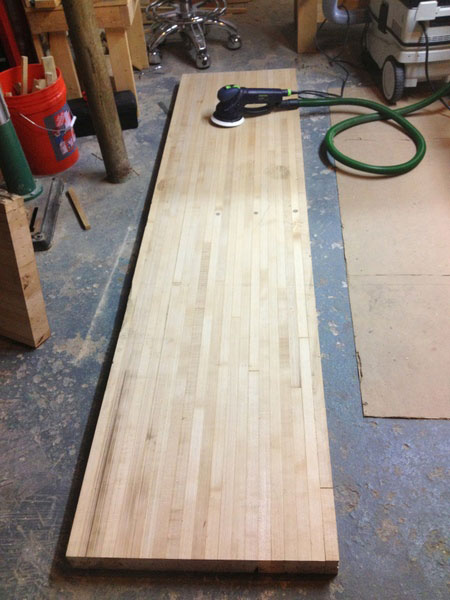 After getting most of the way there, I realized that it would be much easier to continue sanding if I took a few minutes to install the legs first (thus getting the work piece to waist level). I have to say, out of the entire process, this was the most fun not because I work with these components, but because it was the only part of the process that was actually EASY. In about 20 minutes, the project turned from a 2-1/2” slab of wood into looking like a desk.

I used 61-7 wall flanges to attach the legs to the desktop. 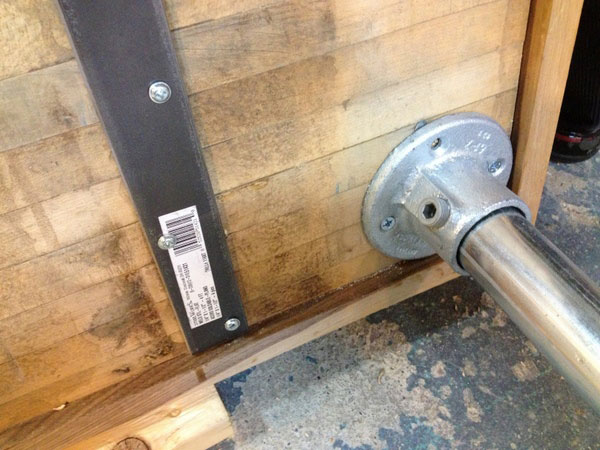 I used 10-7 “tees” to provide stability between all of the legs. I could have used 21-7 fittings to join the width and depth support pieces together at the back of the desk, but I wanted the 8’ long width piece to be adjustable as a foot rest. 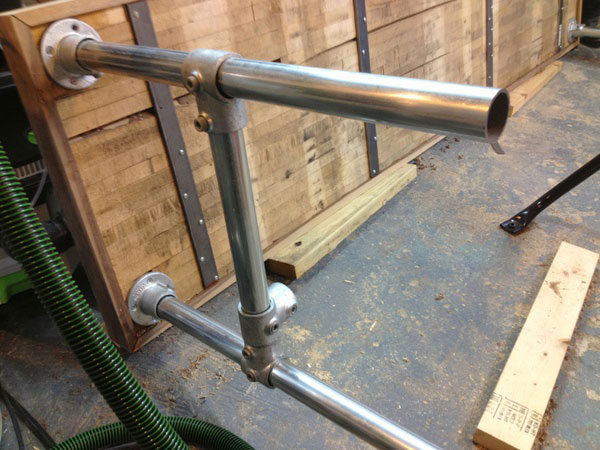 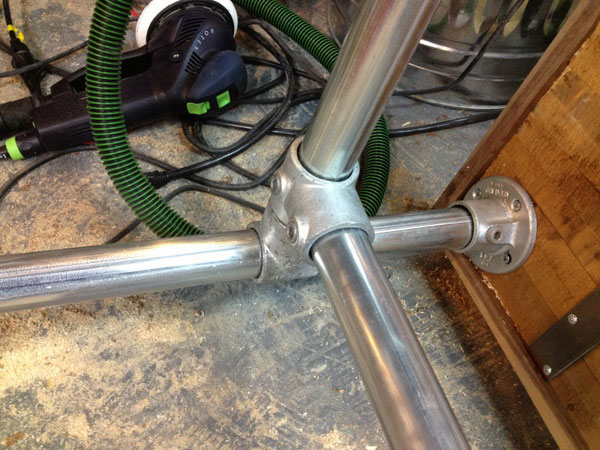 Once the desk was right-side up again (I needed some help with that the piece now weighed in around 200lbs.), I filled all of the cracks with a wood putty to help seal things up. 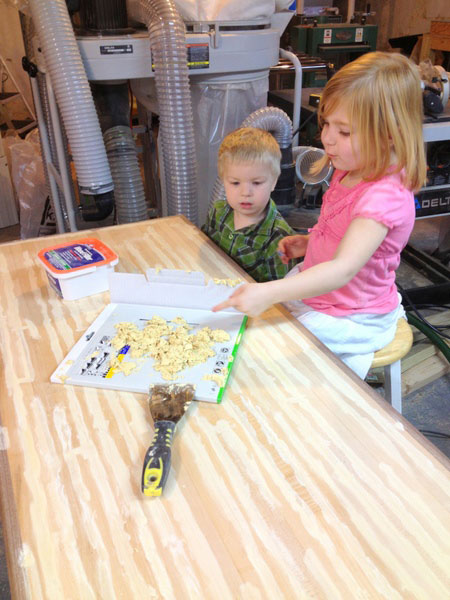 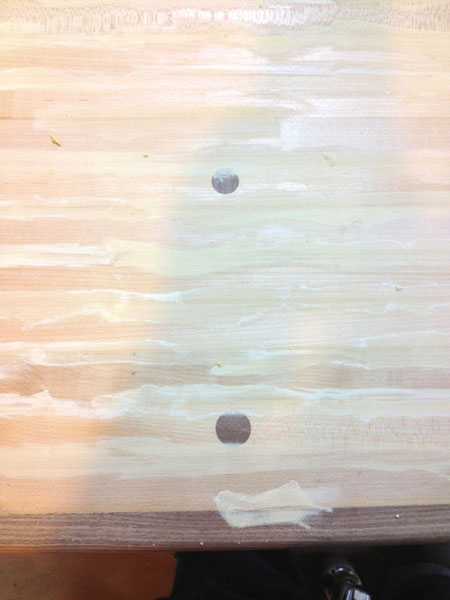 Once satisfied with the result, I began the finishing process. I started with Watco Danish Oil applying about 3 coats. While applying the oil, I also wet sanded up to 600 grit until the wood was starting to really shine. Then I used Arm-R-Seal to coat the surface also applying 3 coats.

The result was exactly what I was hoping for: 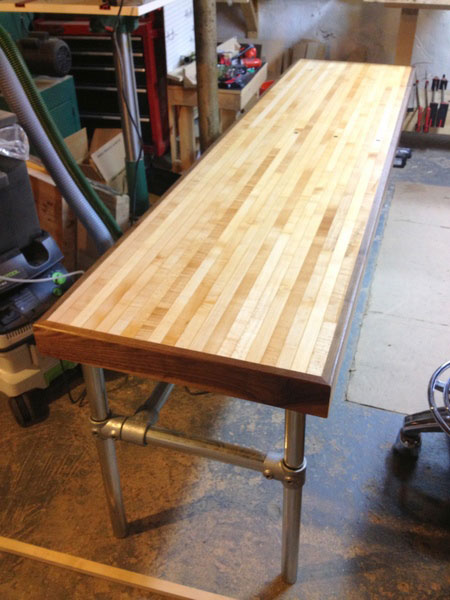 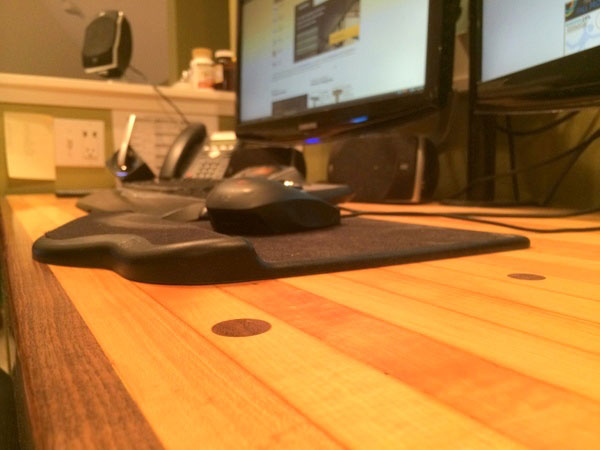 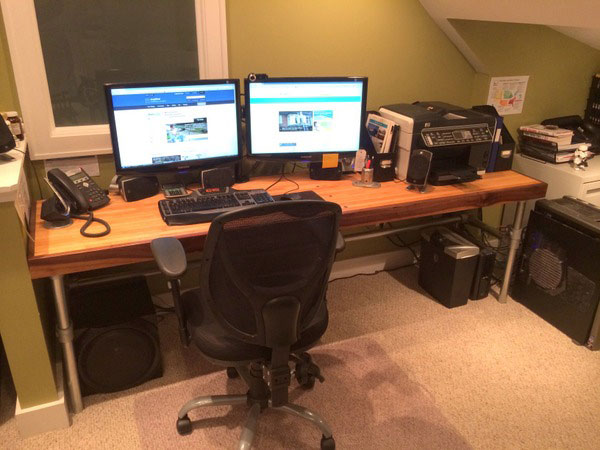 Have questions about this desk or need design assistance on your own project? Contact us at projects@simplifiedbuilding.com